The NetFPGA-SUME board is the ideal platform for high-performance and high-density networking design. A collaborative effort between Digilent, the University of Cambridge and Stanford University, the NetFPGA-SUME has everything you need to conduct cutting edge research and development of state-of-the-art networking systems.
The NetFPGA-SUME is an amazingly advanced board that features one of the largest and most complex FPGA’s ever produced, a Xilinx Virtex-7 690T supporting thirty 13.1 GHz GTH transceivers. Four SFP+ 10Gb/s ports, five independent high-speed memory banks built from both 500MHzQDRII+ & 1866MT/s DDR3 SoDIMM devices, and an eight-lane third generation PCIe offer incredible throughput and can sustain a large number of high-speed data streams to the FPGA fabric and memory devices. Other features include the presentation of twenty transceivers in total on FMC and QTH expansion connectors, and SATA ports. The NetFPGA-SUME's main mission is to give students, researchers and developers a state-of-the-art platform for networking, whether it’s learning the fundamentals or creating new hardware and software applications. This board easily supports simultaneous wire-speed processing on the four 10Gb/s Ethernet ports, and it can manipulate and process data on-board, or stream it over the 8x Gen.3 PCIe interface and the expansion interfaces.

This board is supported by a large collection of free IP blocks available at www.netfpga.org. 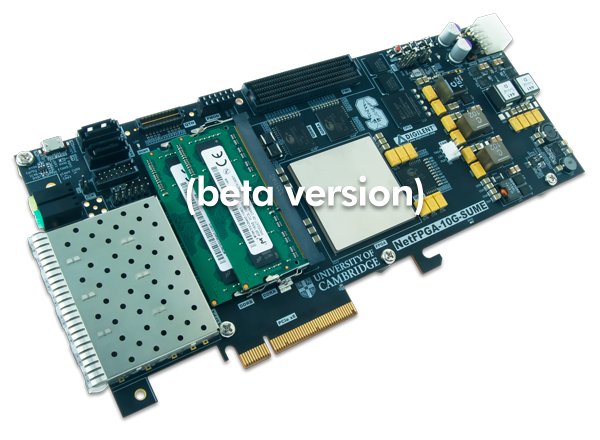 Your shopping cart is empty.
×